Simulation of Flow, Temperature and Molecule Transport in a Buffer-Gas Cell for Cryogenic Buffer-Gas Cooling

This project aims at improved understanding and optimization of cryogenic buffer-gas cooling. With this advanced technique, cold molecules are produced via collisions with cold buffer-gas atoms. Such cold molecules then allow for studying fundamental physics. A buffer-gas cell (see Fig. 1) represents the setting within which the cooling of the buffer gas proceeds. For this purpose, continuous flows of hot molecules are mixed and thermalize with continuous flows of buffer gas at cryogenic temperatures of 5 K or 20 K, respectively. Typically, helium or neon are used as buffer gas, and the flux of buffer-gas is one to two orders of magnitude larger than the molecule flux. The cell is equipped with various small holes: on the one hand, there is an inlet and an outlet hole for molecules and buffer gas, which are arranged at the respective ends of the centerline of the cell, and on the other hand, there are additional side inlets for buffer gas only, as shown in Fig. 1. The outlet hole allows for the gas mixture to leave the cell. There, a continuous effusive or supersonic beam of buffer-gas atoms and molecules is formed. The molecules are then separated from the buffer gas and transported to other experiments for further cooling. It is of utmost importance that the largest possible flux of cold molecules is provided for the subsequent experiments. For this purpose, the goal of this project is the optimization of the buffer-gas cell by means of simulations of the flow and transport dynamics inside the cell, such that it is eventually arrived at a design of the cell which allows for maximum extraction of molecules. Moreover, the simulations will provide unprecedented insights into the flow and transport dynamics in the cell.

When simulating the flow in the buffer-gas cell, it is crucial to take the variable density of the buffer gas into account, which varies due to high temperature gradients within in the cell. Furthermore, the transport of the molecules, which is coupled to the buffer-gas flow, must be resolved. Thus, in comparison to, e. g., much more widely used incompressible flows, such a variable-density flow with molecule transport poses severe additional challenges:

Due to the strong mutual physical coupling of flow, temperature transport and molecule transport, only a fully-coupled computational method for variable-density flow at low Mach number with coupled mass-transport solver can provide a realistic representation of the flow dynamics in the cryogenic buffer-gas cell and thus enable predictive simulations. A recent preceding attempt to simulate such a cell configuration utilized a non-fully-coupled numerical method within a commercial software package, which was obviously not capable of adequately covering all of the aforementioned challenges. 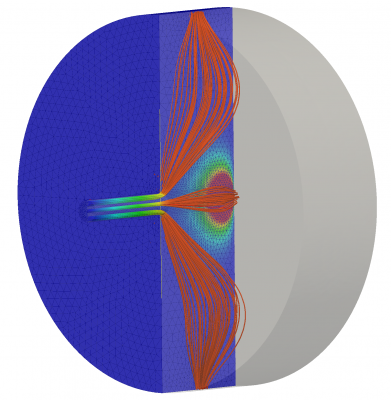 AdCo EngineeringGW GmbH simulates the flow dynamics inside the cryogenic buffer-gas cell for the Max Planck Institute of Quantum Optics using their in-house advanced computational method AVM4, which was developed by AdCo EngineeringGW GmbH together with the Technical University of Munich and Lawrence Livermore National Laboratory in Livermore, CA, USA. This method is capable of accurately, robustly, reliably and efficiently simulating incompressible flow as well as variable-density flow at low Mach number (incl. mass transport) seamlessly without artificial measure or user intervention over the complete range of flow regimes, that is, from laminar via transitional to turbulent flow. In particular, the AVM4 has excellent capabilities for Large-Eddy Simulation (LES) of turbulent flow. Moreover, in contrast to many traditional LES turbulence models, which are implemented in commercial and open-source CFD software packages, no excessive dissipation is introduced in the laminar-transitional regime. Due to its robustness and efficiency, the AVM4 is particularly well suited for large-scale problems in complex geometries.

The large temperature differences of up to 200 K as well as the related density variations occurring for the present problem of flow in a cryogenic buffer-gas cell can be accurately resolved by the AVM4. Results providing unprecedented insights into the flow dynamics in a cryogenic buffer-gas cell could be obtained. For instance, qualitative results in the form of (animated) visualizations of velocity and pressure distributions as well as flow streamlines, such as the ones depicted in Fig. 1 (including a partial display of the discretization) and Fig. 3, are generated for understanding the flow dynamics in the cell. Additionally, distributions of the temperature field as well as concentrations of the hot molecules within the cold buffer gas (see, e. g., Fig. 2 for an exemplary evolution of the molecule concentration) provide novel insights into the transport dynamics in the cell. These qualitative results are substantiated by detailed quantitative results, such as graphs displaying distributions of velocity, pressure, temperature, and molecule concentrations at any desired location or along any desired direction within the cell. Furthermore, the molecule outflow through the central outlet is monitored over the complete simulation time, which is crucial for aiming at maximum extraction of molecules. Based on this broad portfolio of findings, the buffer-gas cell will be optimized in the further course of the project. 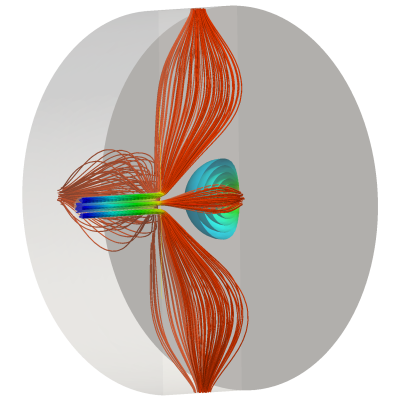